Vancouver is used to subbing in for New York City or Seattle when film crews descend upon downtown or the city’s waterfront. If the Empire State Building or the Space Needle needs to be inserted into a shot, a common refrain will ring out: “Fix it in post.”

That’s when post-production professionals like visual effects artists will work their magic after filming is complete, having in the past created the illusion that bucolic Vancouver was the bustling Metropolis of Superman fame, as seen in 2013’s Man of Steel.

But Vancouver now finds itself rapidly transforming into a hub for virtual production, an approach to filmmaking that’s upending how films and TV shows are typically shot and budgeted.

Instead of “fixing” shots in post, virtual production relies on extensive VFX work and massive LED screens to make foreign cities or alien worlds materialize around actors and film crews before a director even calls action.

The global market for virtual production is expected to grow 20 per cent next year, from US$1.8 billion in 2022 to US$2.2 billion in 2023, according to Deloitte’s 2023 Technology, Media and Telecommunications (TMT) Predictions report released last week.

And Vancouver is already primed to capitalize on that demand going into next year, according to Link Simpson.

“Vancouver has a lot of things going for it,” said the general manager of Scarab Digital Studios Inc., whose firm facilitates virtual production in the film and TV industry.

“Here, you’ll have the same crew that’s working on motion pictures work on smaller episodic shows. So you get that expertise that these guys get from the bigger budgets and they bring it to the smaller-budget shows, which is not happening in L.A.”

Film crews traditionally shoot scenes in studios or locations that might be sprinkled with green screens that VFX artists will fill in with images during the post-production process. Virtual production relies on giant LED wall structures – or “Volumes” – that encircle actors and physical sets to provide lifelike, digital environments such as fantasy worlds or cityscapes created by VFX artists before cameras ever start rolling.

Scarab Digital recently had one client that needed an environment made up of four city blocks. That one took about three months to create, but Simpson said simpler environments like a storefront or a natural landscape can be rendered within a few weeks.

The world’s largest Volume launched at William F. White International Inc.’s (WFW) studio in Burnaby about a year ago in partnership with L.A.-based VFX house Pixomondo (PXO), which creates the digital environments.

Crews and actors at the WFW studio can walk into the 310-degree Volume and find themselves surrounded by LED screens spanning 24 metres in width and 7.5 metres in height. Its first task was supporting the virtual production of Netflix Inc.’s (Nasdaq:NFLX) upcoming Avatar: The Last Airbender live-action TV series, set in a fantasy world known as Asiatic. 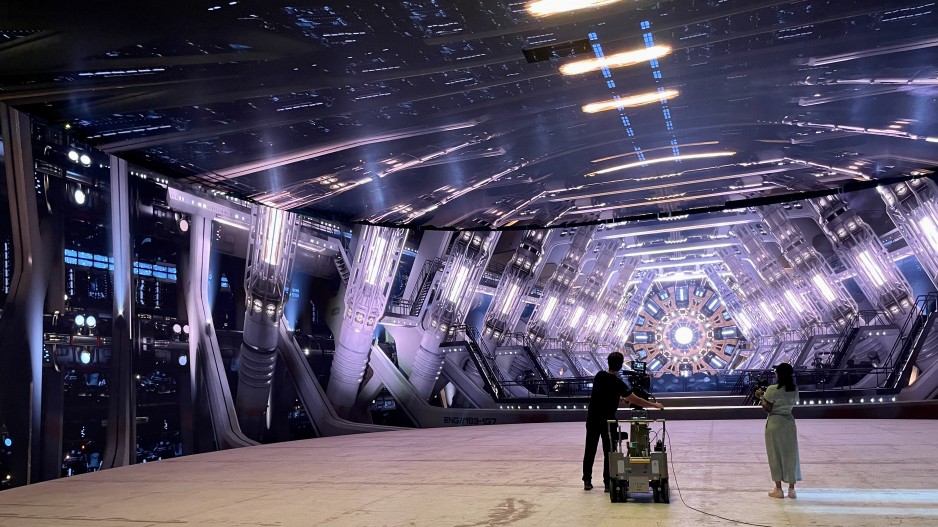 “The payback is almost certainly faster if you are a major hub [like] Vancouver,” Duncan Stewart, director of Deloitte Canada’s TMT research, said about the city’s potential to be a global centre for virtual production.

He knows of at least one Volume that has sprung up in Saskatchewan to help that province’s much smaller film sector.

“Why not stick one in Victoria [or] possibly out in the Okanagan somewhere? I could absolutely see that,” Stewart said.

“Even though – if planned well – it can cost less and be quicker than traditional techniques, the tools involved can be complicated and difficult to use, requiring significant training as well as sophisticated and expensive hardware. Qualified virtual production talent is currently scarce – and therefore costly,” the TMT report stated.

The technology used to build such environments comes from the gaming sector’s Unreal engine, which is used to render photorealistic 3D environments.

If a director wishes to rotate the environment in the Volume or move it side to side, the 3D rendering reveals additional dimensions. And if a director wishes for the camera to sit at a different angle, the 3D digital background changes accordingly to reveal different angles, unlike the typical painted or photographic backdrops often used in cinema.

Simpson said Vancouver’s film sector benefits from having access to a large gaming industry from which to tap talent for virtual production.

Scarab Digital is also planning to launch technical training seminars for producers and directors sometime next year to get more people in the industry up to speed about what’s needed to make a virtual production successful.

“I’ve seen some really great DP’s [directors of photography] that have done fantastic work on our Volume and I’ve seen some that are learning,” Simpson said.

For example, if a 300-person crew enters a studio with a Volume, that crew won’t need to pack up their equipment and shuffle off to another set or on-site location after wrapping a particular scene. Instead, the Volume’s LED screens can morph into a different environment with the click of a mouse.

“Virtual production simplifies the cost,” Simpson said. “It is advantageous but it does require that preparation.”

As TV productions build environments that will be used over multiple episodes and seasons, Simpson noted they will be banking digital assets for future use.

“In the long term, this is really going to help smaller-scale or the mid-range shows that have those tighter budgets because they can’t afford to go to seven locations or hire 100 extras,” he said. “This will sort of allow them to get a higher-quality product for less investment.”